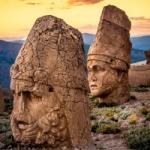 Join world-renowned geologist, scholar, and author, Dr. Robert Schoch, for an incredible 14-day comprehensive tour exploring the archaeology, history, culture, and natural beauty of Turkey – the region rightfully referred to as the "Cradle of Civilization".

Our tour will begin in Istanbul, the capital of the former Byzantine empire, where we will see such highlights as the Hagia Sophia, Topkapi Palace, the underground Basilica/Yerebatan Cistern, and the Hippodrome.

We then continue our journey, exploring the legendary city of Troy, Greco-Roman Pergamon, and the biblical city of Ephesus. Over the following days we travel through the timeless and breathtaking rock landscape of Cappadocia, investigating its rock-cut “churches” and enigmatic underground cities.

At the site of Catalhoyuk, ancient people built a dense complex of mudbrick and plastered buildings, beginning over 9,000 years ago. Once hailed as the first evidence of city life, Dr. Schoch will explain on-site how we now understand that advanced civilization goes back even further in time – to the end of the last ice age. Catalhoyuk is representative of a dark age between the collapse of one major cycle of civilization and the emergence of another.

An attraction that is a favorite among many travelers to Anatolia is Mount Nemrut with its colossal statues, often considered to be the eighth wonder of the ancient world. The visage during sunset from the mountain top is breathtaking and something we have scheduled for this trip.

The highlight of our tour – considered by numerous scholars the most important archaeological discovery of the last hundred years – is the magnificent megalithic complex of Göbekli Tepe. Dating back 12,000 years to the end of the last ice age, Göbekli Tepe is direct evidence of advanced civilization some 6,000 years prior to the “traditional” timeline for the emergence of civilization during the period of 4,000 to 3,000 BCE.

Introducing Dr. Robert Schoch – Our Host for the Tour

There is no better person to guide you through ancient sites and geological wonders than Dr. Robert M. Schoch. Classically trained, with a Ph.D. in geology and geophysics from Yale University, Dr. Schoch has been a fulltime faculty member at Boston University since 1984. For over three decades Dr. Schoch has been studying ancient civilizations around the world, in such diverse countries as Egypt, Turkey, Bosnia, Romania, Wales, Scotland, Mexico, Peru, Bolivia, Chile, Easter Island, Indonesia, and Japan.

During the tour, Dr. Schoch will give a formal lecture presentation regarding his research, discuss the sites we visit, and every guest will have the opportunity to take part in public and private conversations with Dr. Schoch as everyone travels together, enjoying all of the sites and activities on the itinerary.

In the early 1990s, Dr. Schoch's geological analyses of the Great Sphinx demonstrated that the statue is thousands of years older than the conventional dating of circa 2500 BCE, bringing him worldwide fame. This work has been both controversial and pivotal in reshaping our understanding of the origins and history of civilization. Recent discoveries in Turkey, particularly at Göbekli Tepe, which Dr. Schoch has studied extensively (the photograph of him above was taken at the site in 2010) and which is on the itinerary for the tour, confirm the very ancient origins of civilization, going back to the end of the last ice age, some 12,000 years ago.

Dr. Schoch’s most recent research indicates that extreme solar activity is what ended Earth’s last ice age, creating global and cataclysmic flooding, ocean level rises, the decimation of the high civilizations of the time, the extinction of many large mammals circa 9700 BCE, and the subsequent 6,000-year gap in humanity’s timeline.

It is really going to be an extraordinary adventure, so I would encourage you to join us, if possible, because we never know if we will be able do it again. This is not a trip where one just goes with a conventional tour guide. We will bring our own perspectives, our own passions, our own personal research to the trip. I can guarantee you that while we are together, we will all be seeing new things. We will be exploring the sites, ideas, and the beauty of the country together. This will be a very different experience compared to standard tours – one not to be missed. – Dr. Robert M. Schoch.

Two visits to Göbekli Tepe & a visit to Karahan Tepe