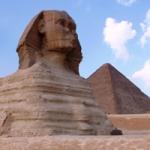 This is the most exciting and exclusive tour of Egypt we have ever offered! Discover the Land of the Pharaohs with geologist Dr. Robert M. Schoch, one of the most notable and widely respected scholars pursuing the true origins and antiquity of civilization.

Explore the wonders of the ancient Egyptian civilization – from the tombs of the greatest pharaohs in the Valley of the Kings, through the less-visited but no less impressive sites of Middle Egypt, to the magnificent temples of Karnak and Luxor and the rock-cut temples of Abu Simbel. Imagine the Great Pyramid and the entire Giza Necropolis being open just for you. Have a once-in-a-lifetime chance to stand between the paws of the Great Sphinx rather than seeing it from a distant viewing platform. Finally, top off the tour with a visit to the country’s newest landmark, the Grand Egyptian Museum, home to an immense collection of ancient treasures, including King Tutankhamun’s golden mask.

Throughout the tour, you will stay in the finest and most historic 5-star hotels, sail on a luxury Nile cruise ship, dine on delicious local cuisine, visit some of the most mysterious ancient sites in the world, and embrace the unique Egyptian culture. With us you will experience Egypt like no one else!

Dr. Robert M. Schoch has devoted his life to the study of Earth, its creatures, and, for the past three decades, its most ancient civilizations. A full-time faculty member at Boston University since 1984, Schoch holds a B.A. (in Anthropology) and B.S. (in Geology) from George Washington University, and an M.S., M.Phil., and Ph.D. in Geology and Geophysics from Yale University, among other distinctions. In the early 1990s, Dr. Schoch stunned the world with his revolutionary research that recast the date of the Great Sphinx of Egypt to a period thousands of years earlier than its standard attribution, and in doing so demonstrated that civilization’s history is older and greater than previously believed. He has appeared on numerous radio and television shows (the Emmy-winning The Mystery of the Sphinx, which first aired on NBC, remains a favorite among audiences), Internet podcasts, and is the author, co-author, and/or editor of books both technical and popular, including Voyages of the Pyramid Builders, Pyramid Quest, Origins of the Sphinx, and Forgotten Civilization: New Discoveries on the Solar-Induced Dark Age.

Dr. Schoch and Catherine Ulissey travel the world together in their pursuit of a deeper understanding of humanity’s past (Their personal website is: www.robertschoch.com). They will be accompanying all participants on this Grand Tour of Egypt throughout the trip, including during the add-ons before and after the main tour, and will be available for informal discussions in addition to various formal presentations that Dr. Schoch will offer during the course of the tour.